So. You took the plunge, and purchased a big heavy expensive condenser microphone.
It cost as much as your car, maybe. So how do you feel about putting it on one of your standard mic
stands? The ones you buy at the music store? What if someone knocks your sizeable investment over and
breaks it in one way or another?
What you need is a real microphone stand! Three companies made microphone stands that are
nearly impossible to tip over: Starbird, RCA, and Mole-Richardson.

What’s more, its effects may be altered by changes in the liver or in vitamin K production by the normal intestinal flora. This study was funded by Biogen, Inc, Cambridge, Mass. Tell your doctor if you have: What other drugs will affect cobicistat, elvitegravir, emtricitabine, and tenofovir http://farmacias-semreceita.com/. Tensilon test for evaluating treatment requirements in myasthenia gravis.

These classic boom stands are somewhat similar in design, but differ in details, fittings and
quirks. They are each about 6 – 7 feet tall, and when you extend the boom arm, you can place your U47
about 15 feet up. The stand base consists of 3 separate arms that extend from the central shaft.
The Starbird is the classic stand seen in many ’40s and ’50s recording studios.
The RCA stand is quite similar, differing in its base construction.
The Mole-Richardson “Comet 75” is painted a cool dark purple color, and was originally
designed as a stand for lights on film sets and for photo studios. They also have attachments for
microphone stand mounts. The fittings on the Mole-Richardson stands are arguably slightly better than on
the Starbird or RCA stands.
As these were all quite expensive when they were made, they are scarce. We have seen more
Starbirds than the other two brands.
If you have a large room, there’s nothing better than one or more of these giant stands. 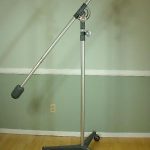